When asked about his success as an entrepreneur and music mogul, Motown founder and former CEO, Berry Gordy once said, “Success starts with a dream”. A dream that built a music empire and shaped a generation, the Motown success story has been chronicled, and studied by countless scholars and critics alike. The subject of college level courses, Motown has been examined both for it’s artistic contribution to the tapestry of poplar music  as well as it’s role as a vehicle for social change through the transition of what had previously been viewed as exclusively African American music into “mainstream” American music channels.   Now while both areas of investigation reveal distinct aspects of Motown’s legacy, it is the creation of the Motown business model and its subsequent inroads into an heretofore closed industry that holds incredibly interesting implications for a new generation of diverse media creators.

Now in order to appreciate the significance that Motown holds for black creators of media today, one must first understand the social setting in which Motown was formed.  Though the challenge of minority content creators attempting to break through institutional barriers in order to reach “mainstream audiences” is far from a new issue.  The social backdrop during the 1960’s certainly posed a set of challenges few could relate to at any other time in history.  Segregation during the sixties in America was not just limited to institutions like schools, housing and transportation. Music and virtually all forms of media were at the mercy of Jim Crow based policies.  White stations didn’t play “colored music” and vice versa.  Black artists were consistently relegated to small clubs and “juke joints” to perform and often received no national or even regional exposure outside of channels which specifically targeted black audiences. Even in the event that black artists would create work deemed acceptable for white audiences by the  dominate music executive hierarchy, it was common practice for record labels to have popular white recording artists take the original creative piece, remake it and release it without any form of financial or creative compensation to the original artist. 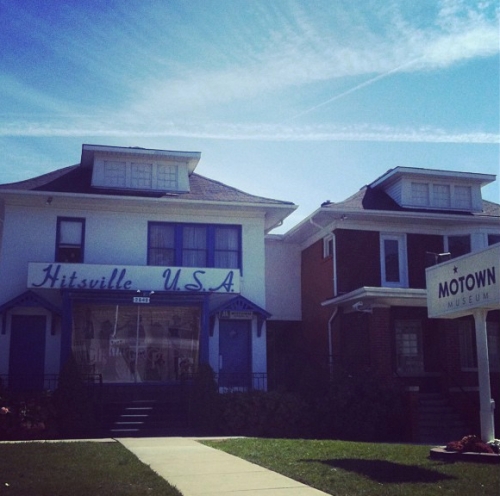 It is with all of these factors in mind that Berry Gordy still set out to build his own record label. Collecting $800 of seed capital from family and friends in 1959, Gordy founded the two record labels (Tamla Records & Motown Records) that would become  responsible for the “Motown Sound”, a sound  that  in many ways would  challenge the racial status quo of a nation through music.

One of the keys to the success of Motown was the fact that Gordy had direct ownership of all of the elements connected with the production of the Motown sound. Gordy hired the writers, musicians, singers and what they produced belonged to Motown. Even the decision to initially establish Motown as two separate labels was done in order to make sure that Motown had some element of control over how often their records could be played on air. A model of creative efficiency, Motown’s production process was modeled to take after the most prominent Detroit company, General Motors.  Though each creative work had a look and feel that was uniquely its own, Gordy controlled how that work would be integrated to compliment the overarching Motown creative vision and enterprise.  Sure there were stars, Marvin Gaye, Smokey Robinson, Diana Ross, but in many ways they were Motown’s Cadillac, Chevrolet and Buick.  Gordy controlled the style and the rhythm that made each artist both unique and the same.  People grew to depend on the Motown sound and in doing so helped Gordy become the empire builder.

Another key element to consider when analyzing the success of Motown is the manner in which the Motown brand was able to transcend longstanding cultural barriers. Though Motown was a  black owned and operated record label it was far from the first of its kind. Motown was however able to go places where similar creative groups had not. While the importance of ownership of the creative product and the means of production was highlighted earlier, Gordy’s ability to recognize and strategically approach existing social barriers through branding is equally noteworthy. From stressing the universal qualities of the lyrical content of Motown artists to the creation “talent development programs” to prepare his acts for non traditional media and performance opportunities (and the forms of discrimination that may come with), Gordy looked to brand Motown as an entity that was connected to all communities.  It was from this universal platform and the success that followed it  that a number of Motown artists were able to share messages of social change that were particularly pertinent to their African American audience.

Now it is important to note that while Motown proved to be a massive success both creatively and financially,  the tactics utilized by Gordy have not gone without some level or criticism. One criticism of Gordy and Motown is that in achieving initial commercial success the label perpetuated a representation of black talent that least disturbed the sensibilities of  white audiences.  From publishing album covers without pictures of the artists, to the styling and development of artist performances, one can see how Gordy’s tactics may have raised concerns.  It is with these criticisms in mind though that one must again look at the full body of work of Motown as an institution to appreciate the ability of the label to push for standards for the acceptance of black artists in media. It is with the growth of Motown that we see not only increased opportunity for  black artists, but for the exposure of their work.

Media entrepreneurs today should take notice of the plan behind the music.  Gordy patterned his rise not just on making quality records.  Gordy understood and put into practice the concept of ownership and  quality control.  He marketed to an under-served group that was both black and white but he found a way to make mainstream America see the potential and profit of his product. and while the media landscape has changed in a number of ways since Gordy took that fateful loan in 1959, the Motown story still provides valuable lessons for aspiring creators of media from minority communities today.